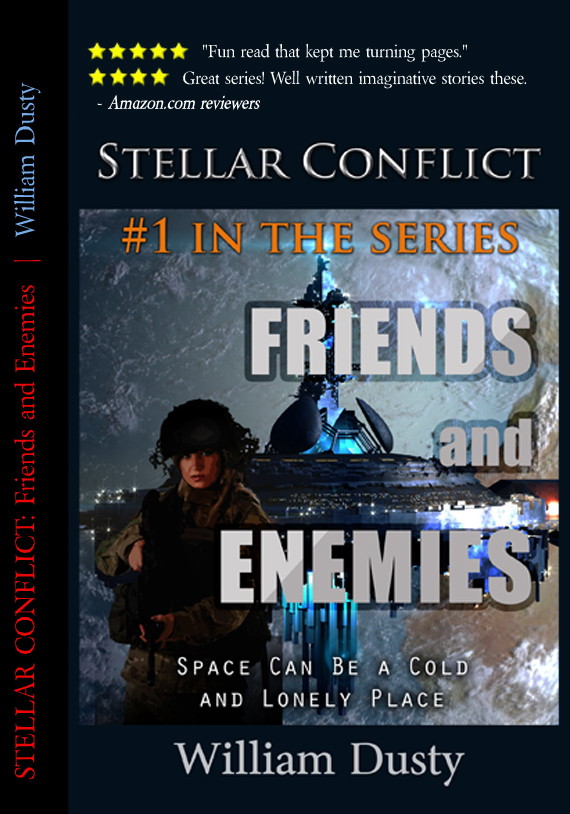 Friends and Enemies (Stellar Conflict Book 1) is available in both ebook and paperback. The price shown is for ebook only.

A teenage recruit meets his new squadmate — a veteran female soldier — for the very first time in this debut novel in the Stellar Conflict series.

DETAILS:
Nearing the end of a twenty-five year galactic war, the Earth-led Interstellar Alliance stands poised to enter the enemy’s realm for the very first time. The TCS Ranger, the Alliance’s newest battlecruiser, is sent out to begin probing operations along the border sectors, and veteran cruiser commander Jonothan Remmick is assigned as its captain.

Among Remmick’s command staff is his newly-assigned Combined Sciences chief, Commander Caramissa Kreth. Kreth is a Saetian, raised in exile after her home world was overrun by the enemy. Now third-in-command of the Ranger, she must overcome not only the racism that comes with being Saetian, but also her own species’ inherent timidity and aversion to conflict if she hopes to remain at her position.

Below decks aboard ship, meanwhile, newly-transferred Senior Private Alyssa Bretchvelle is a member of the Alliance’s Ground Troop Service and a veteran of the bloodiest fighting on the frontlines. Bretchvelle was a casualty of the war early on in her service, having acquired the alien “Ves-Navik” blood virus after being wounded in combat. Hated in her previous unit prior to joining 2nd Platoon aboard the Ranger, Bretchvelle has found herself alone once again, but still wanting to show her worth to her new comrades. If only they would give her a chance.

That chance comes soon enough as the Ranger’s maiden voyage to war gets underway.

There are no reviews yet.

Be the first to review “Stellar Conflict: Friends and Enemies” Cancel reply